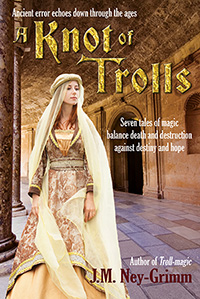 North-lands spellcasters who reach too boldly for power transform into trolls – grotesque villains wielding a potent magic and destined for madness.

Spanning the North-lands history, from ancient times to the pastoral present, A Knot of Trolls features seven such evildoers. Seven trolls and the ordinary youths called by chance or by destiny to take a stand.

“The Troll’s Belt” stars motherless Brys Arnsson, challenged as much by his own deceit as by his troll foe. “Crossing the Naiad” presents shepherd girl Kimmer with a dangerous tragedy from the distant past.

“Skies of Navarys” follows two friends with a vehement difference, their contested decision to decide the fate of thousands. In “Resonant Bronze” Paitra and his brother struggle to claim appropriate guilt – neither too much nor too little – and thereby defeat a troll warlord.

“Rainbow’s Lodestone” offers the spirit of the rainbow a chance to learn that the smallest places birth freedom. “Star-drake” stalks a pitiless troll-herald to defeat – or is it victory? – utterly unforeseen.

And in “Perilous Chance” young Clary needs a miracle.
But her miracle – when it comes – sports razor-sharp talons, world-shaking power, and a troll-witch to guard its sleep.

Seven tales of magic balance death and destruction against destiny and hope.

Ebook
A Knot of Trolls is a collection of short stories available as an ebook for $6.99
Amazon I B&N I iTunes I Kobo I Smashwords