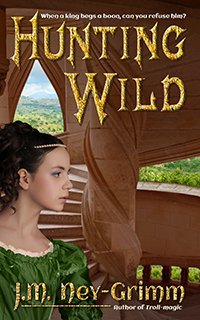 Young Remeya – fosterling and maid-in-waiting to King Xavo’s sister – worships the old and forbidden horned god alongside the princess.

A worship made taboo half a millennium ago. Performed still in secret by a few. Quietly tolerated by the king.

Until madness took him, there beside the stone well on the grassy hillside of the castle’s outer bailey.

Worse, Remeya believes King Xavo’s insanity arose from her own mistake. Because she said yes, instead of no.

When life itself hangs in the balance, putting wrong to right is surely past praying for. Or is it?

Epic fantasy in which old beliefs and old loyalties clash with hidden magic in the Middle Ages of J.M. Ney-Grimm’s god-touched North-lands.

Ebook
Hunting Wild is a novella available as an ebook for $3.99
Amazon I B&N I Inktera I iTunes I Kobo I OverDrive I Scribd I Smashwords I 24Symbols